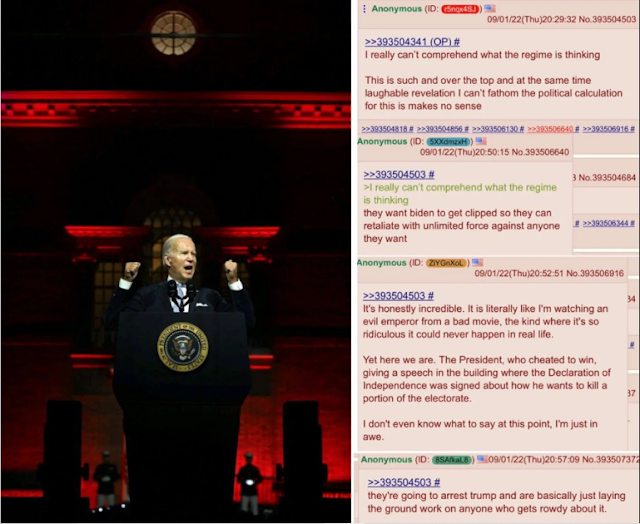 The more you try to erase me the more the more

The more that I appear

The more I try to erase you the more the more

The more that you appear   https://www.youtube.com/watch?v=e97tkGJ28yU 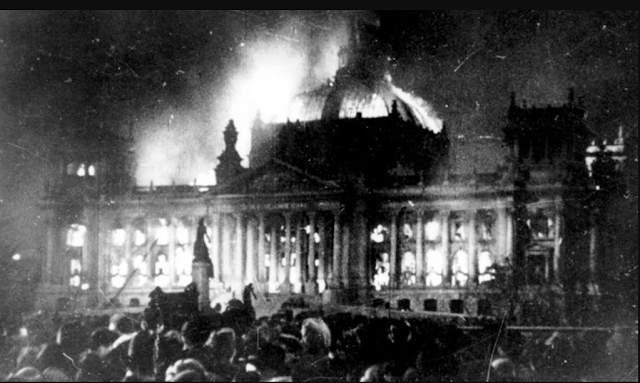 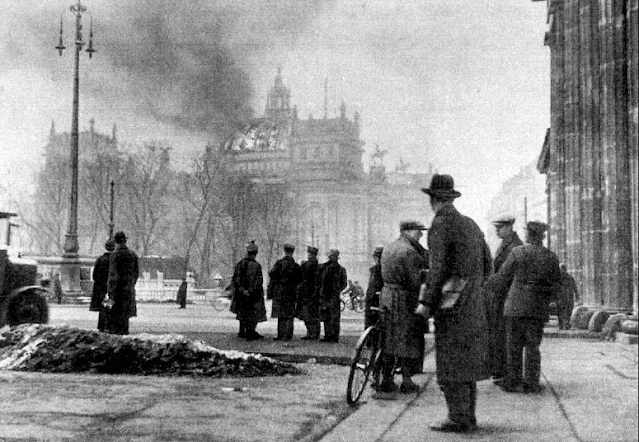 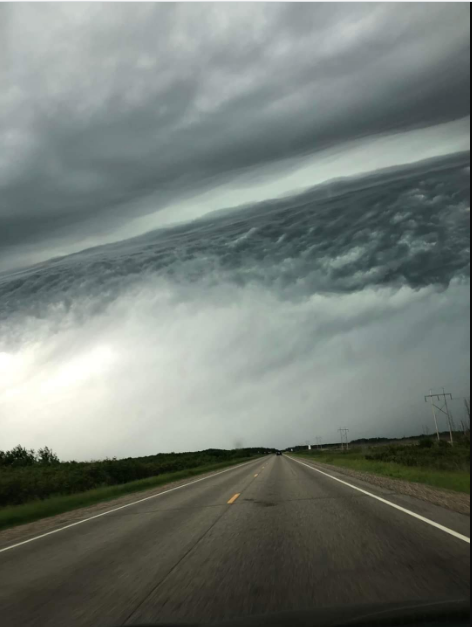 And when it all was over, the slate wiped clean with a touch

There God stood and He saw it was good and said "Ashes to ashes, and dust to dust."

They said "God made us in His image, and its in God that we trust,"

When asked about the men that had died by their hands they said ashes to ashes, dust to dust

We've done all that we can but it slipped thru our hands and it's ashes to ashes,

and dust to dust

Can anybody else feel something in the air? A radical change overnight in the psychic barometric pressure? There's a hurricane of crazy coming -- and landfall is imminent.

The seismic ramifications of the V For Vendetta-laced optics and poison verbiage of the Biden speech a night ago continue to reverberate and gain exponential staying power in the mass collective. Twitter became an echo chamber of whoop ass over it. If Trump was a loose cannon, then this was a full-on, 21 gun salute of unhinged rampant and dangerous dementia paired with a fascist ideology at full gallop. And it's very hard not to see this as maliciously deliberate.

First, the visuals...what were they thinking? All at those levels employ herds of optics and PR pros to meticulously select every visual and camera angle knowing exactly what they're trying to get across covering every mindset and personality profile. They chose what they chose for a reason. To provoke, To incite. They cover this kind of ground to the point of making someone like Kubrick look like a beginner. There is ZERO chance this wasn't entirely deliberate.

And where to begin with the rhetoric? When you call out basically half the country as being domestic terrorists and imply that they will be dealt with accordingly, what do you think is going to happen? Exactly what you want to happen -- a situation you are plotting and planning for. Other than the obvious V For Vendetta, guess what was trending on twitter all day long? #pedohitler.

A fantastic breakdown from the ever on-point JP right here: https://www.youtube.com/watch?v=tSGTlrA0BfE&t=261s

Spoiler alert: be not in the slightest surprised if another Reichstag fire event happens in the very near future. One that will be rigged and engineered, steered and plotted, by the left to be blamed on the MAGA forces and geared so that a full spectrum stranglehold can be ushered in. And I'm not the only one thinking so: https://www.reddit.com/r/conspiracy/comments/x3q7oi/in_1933_hitler_ordered_the_false_flag_attack_of/

The only good thing about all this is in the saying so. The more word gets out that there is historical precedent, that this is a more than distinct possibility -- the less likely it is to actually happen. Opening your mouth, calling their bluff, can stop a lot of things.

Hey, I've been using stills and screenshots from V For Vendetta for years now (at least since the Epstein arrest as I recall) to go along with the message that we are the majority, we're actually in charge and the dominos are falling just as they should. However, I know full well that these waters might be tougher to navigate without superhero revolutionaries being a real thing -- still -- we have strengths we don't even know about yet I believe, and yes, powers yet to be revealed that may even verge on the paranormal, quantumly entangled and expressed, ready for just the right time to show themselves.

They want to kill us all but they're so stupid they couldn't possibly accomplish it.

This person graduated with honours from an elite Ivy League University, somehow.

And her math is off -- it's officially a bazillion kajillion jobs. Get it right lady!!

(Something like a garbjillion if you break it down mathematically.)

It needs 40+ more GOVERNORS like these 2. Nobody at the Fed level needed. This is the design of our brilliant, beautiful Constitution that they have no answer for. EVERYTHING can be controlled at the State level. It's the way it was designed: the government answers to the States, not the other way around. Look at how Trump was stonewalled and crippled, and he was President for cripe's sake. The Big House can and will always be controlled by strong Governors.

Meanwhile, the wolf is at the door in other aspects also: https://www.reddit.com/r/conspiracy/comments/x4tr7a/young_people_in_portugal_are_dying_at/

I think we should be looking at Exhibit No.1 in the case against.

With a rather huge sidebar: https://www.reddit.com/r/conspiracy/comments/x4ptgs/i_guess_a_secret_global_network_of_elite/

Because ALL of this you're living now, the global meltdown, cratered economies, lockdowns, gas prices, food prices, mind games, an engineered released virus, a fake and non-existent "pandemic," the "cure" that was waiting in the wings, a stolen election, transhumanism run amok, the WEF taking charge of life and defining our very reality...all got their green light when too much attention was being paid to, and too much public exposure and heat was being placed on, the Epstein network. Period. Never forget that.

All of it was due to go down anyway, but the timeline was seriously accelerated by the rampant public interest to get to the bottom of what Epstein was doing...was REALLY doing.

And it still continues -- since we have mentioned Tracy Twyman many times in these pages: 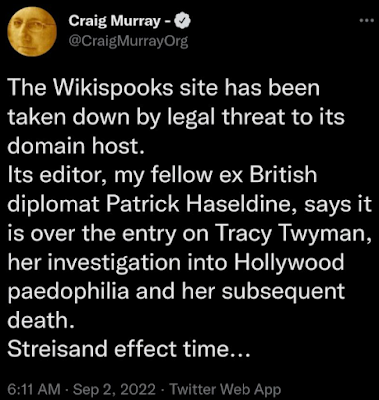 (Streisand effect for those of you that don't know is so named cos when the Babs tried to erase her mansion from google maps to retain everlasting sweet anonymity, everyone found out where she lives. Haha!!)

Everything and more that got Wikispooks deleted: https://burners.me/tag/tracy-twyman/

Because it is more important than ever now, at this juncture, to keep this all front and center.

And her last posting before being erased: https://web.archive.org/web/20180707172927/http://www.tracytwyman.com/plusultra/twyman-trip-8-the-internet-is-compromised/

For your edification, I believe you should consider all of this information to be extremely important and dangerous.

That building in NY she mentions in the archive above ("...describing a conspiracy centered around a building in New York, involving the intent to chip us all with the Mark of the Beast!") I believe is likely this one: https://cosmicconvergence.org/?p=19035

And who seems to have been plotting a LOT behind he scenes to our ruin: https://brownstone.org/articles/jared-kushner-and-the-mystery-of-the-first-us-lockdown/

This is an incredibly important and telling article, and the dots all connect in a line.

In regards to chipping everyone, listen to this latest vid from Pete Santilli interviewing Carrie Madej where she cites the first trials of brain-machine interface tech as used on Black Hawk pilots; where they could fly the choppers hands-off, using just their mental instructions to the vehicle itself to alter flight characteristics, speed, attitude, direction, etc.

After a time, they couldn't distinguish between which thoughts were their own and which were being imparted by the AI-characteristics inherent in the tech itself. Hearing "voices in the head" taken to the extreme. They all ended up committing suicide. From around the 11:30 mark here: https://gospelnewsnetwork.org/2022/09/02/dr-carrie-madej-pete-santilli-americas-patriot-community-to-defeat-the-wef-agenda-video/

This also highly reminiscent of the initial testing of the Elon Musk DARPA-inspired neuralink tech on primates, where all of the monkeys ended up clawing their skulls and faces off trying to get it out...https://www.cnn.com/2022/02/17/business/elon-musk-neuralink-animal-cruelty-intl-scli/index.html

That utopian road to transhumanism, AI-inspired glory, and immortality is paved with unimaginable cruelty, grisly fates for all involved, and a distinct Luciferian mindset.

Remember Madej unveiled first learning of things like this YEARS ago when she was an internist in this JD Rucker interview, after which came her mysterious and nearly-fatal plane crash: https://jdrucker.com/days-after-exposing-new-world-order-in-bombshell-interview-anti-vaxx-doctor-carrie-madejs-plane-mysteriously-crashed/

We're all cows in a confined feeding operation, caged here by low-vibrational energy vampires to sustain them. So stop helping maintain the prison. Remember that Jesus was human for a time also. He knows exactly what we're going thru. He cried and he smiled and he was in awe and despair. This is why we're never alone. The world wants you to believe He is not here and not listening, that we're alone and forgotten, that hope and love are lies. All you need to always remember is that God uses all of us for His purpose, rearranging all our lives to fit His perfect plan.

This will be the everlasting image of the failed, chaotic, treacherous Biden Administration. But always remember, it is emblematic of far worse. FAR worse. And nothing happens without the groundwork. Research and destroy. Because the weather forecast? Dark skies. 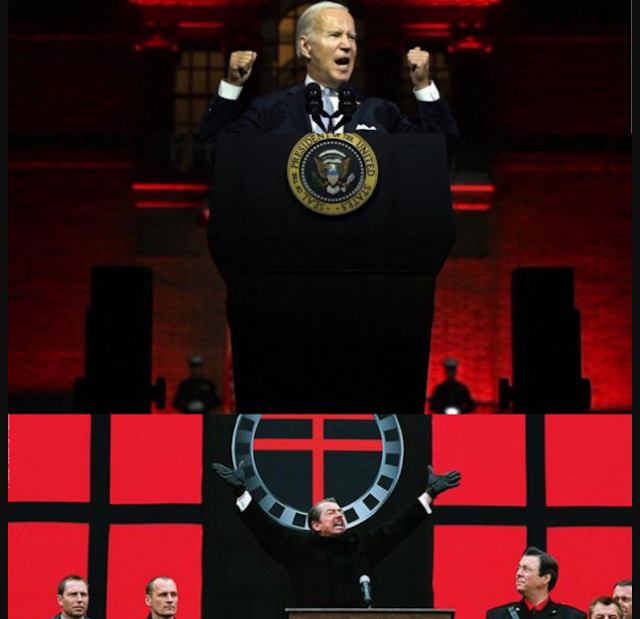