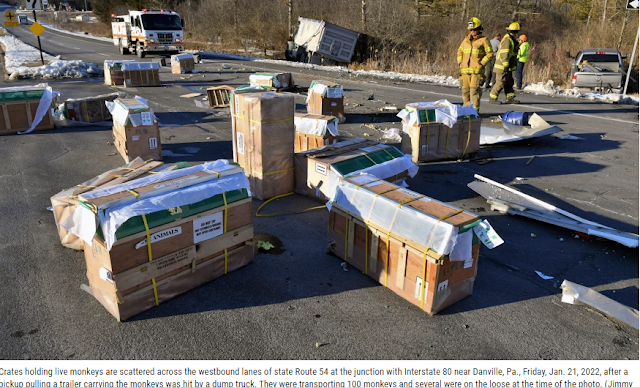 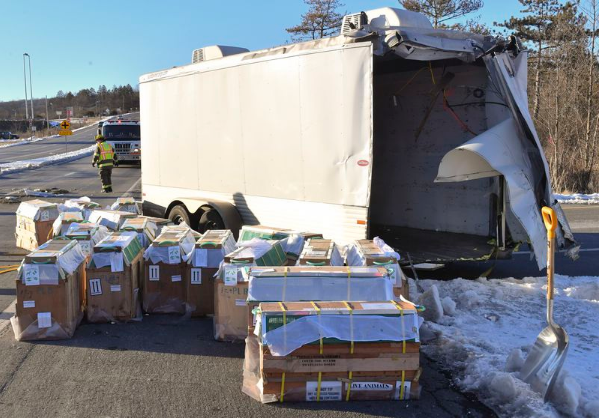 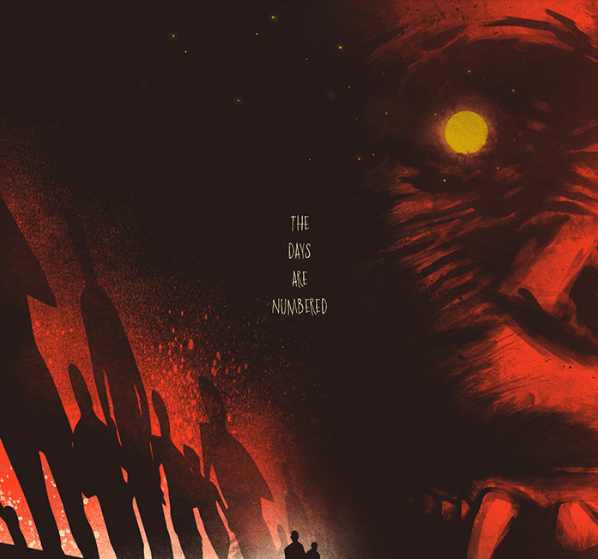 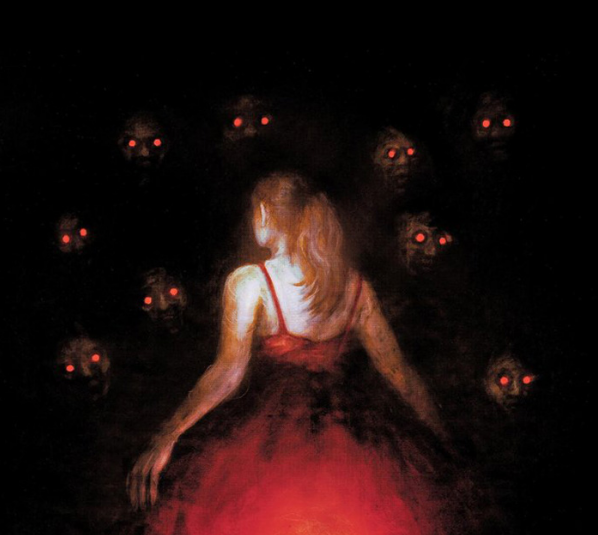 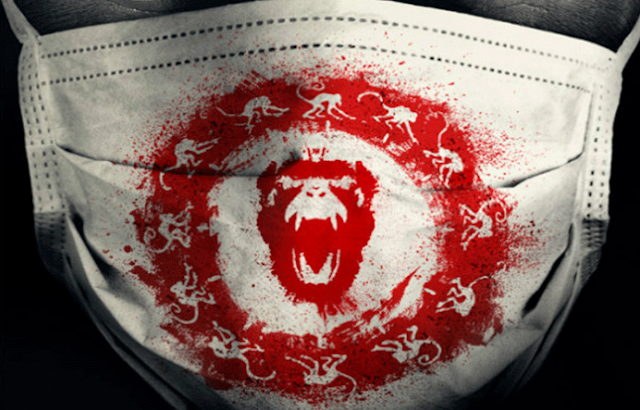 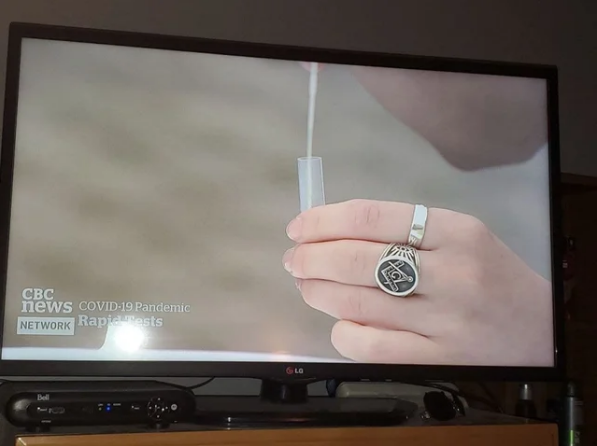 No one could explain it

Times are tough, frustration/ Need relief, medication/ Gone to far, intoxication/ Fight the urge, of temptation/ Miles to go, no destination/ Is it real, hallucination/ Lose the dream, of stagnation/ Feel so lost, desperation

It's much too close, contamination/ Love and pain, and deviation/ Just suck it all, ejaculation/ It's much too late, for damnation

Ironic isn't it, that just a few posts back I cited one of my favorite Chinese proverbs "If there is no tiger in the mountains the monkey will be king." And now thru the powers of synchronicity and shared karma, those monkeys are loose in the psychosphere and running quantum entangled riot over the narrative of late.

I still have no idea what's going on, but some more threads have emerged from the fog of war that is our lives now, and a bleak picture emerges...

Perhaps we'll say this phase of the ending began on a cold Friday in Pennsylvania, at which time a transported cargo of monkeys from Mauritius met a crashing end to their journey hard by the intersection of I-80 and Rte 54, details of which are addressed here: https://www.pennlive.com/crime/2022/01/pa-monkey-truck-crash-spawns-conspiracy-theories-after-woman-at-scene-falls-ill.html

Concerns quickly became magnified when the CDC became involved, and any answers -- were the monkeys infected? Where were they going? (supposedly Florida??) -- weren't forthcoming and even the questions made little to no sense. getting to Florida from a JFK arrival by way of PA made little to no sense at all for starters, unless the real destination was in fact somewhere in PA all along, which hosts more than a few number of clandestine BSL-3 & 4 labs likely both over and underground. Then there is this headline from the archives: https://www.reddit.com/r/conspiracy/comments/scfti1/friendly_reminder_that_vials_with_smallpox_were/

And check that dateline: November of 2021.

There is also the not small matter, which I have not been able to verify but that needs mentioning in the interim, that the woman that was exposed bears a striking resemblance to someone else of note: https://www.reddit.com/r/conspiracy/comments/scuszm/jennifer_b_nuzzo_gave_a_ted_talk_a_month_ago/

You will also notice how the narrative keeps shifting -- first she was fine, then she stuck only her finger in the cage that she thought was full of "kitties" (!!), then she was hissed at, now she's got pink eye and lung problems from some unknown contagion. Note that the hissing part indicates airborne transmission. So things seem to be being manipulated on the fly...

I'm sure you can glean from all these articles the fact not only that we're not getting the whole story -- it's extremely likely we're not even getting half of the story right now. And that should make you extremely worried given what else is going on in our little sci-fi theatre over the past several days...

This past Sunday in DC saw a frigid 60,000 attend a Stop The Mandates Rally featuring speakers like Del Bigtree, Robert Malone, Peter McCullough and RFK, Jr. amoung many others assembled to address their rights to stop the rampant tyranny and human rights violations growing in our midst. By far the 2 most important speeches are right here, and they have been getting scrubbed mightily: https://rumble.com/vt54k5-robert-malones-full-speech-12322.html

Then on the heels of that rally came the news of Senator Ron Johnson launching a series of Congressional investigations on Capitol Hill re the viability of all covid vaxxes, their possible harm to all concerned, the clinical data, and all trial info. was this covered wall-to-wall 24/7 the way it should have been by all the MSM, the way similar critical junctures in our history have been like Watergate, Iran-Contra, etc? Not in the slightest.

The fact that not a PEEP was heard over a critical issue that effects the life of every man, woman, and child on this continent and the world should tell you all you need to know about the "objectivity" of today's vaunted media machine. The fix is in. Here's what I could find: https://www.banned.video/watch?id=61ef34b331408b149913b52e

All this unfolding amid a backdrop of the WH withdrawing all covid regulations: https://www.reddit.com/r/conspiracy/comments/sddpx5/cnn_white_house_to_withdraw_covid19_vaccine/

When CNN admits this, when the UK, Czech Republic, Ireland, and other EU stalwarts begin dismantling their covid lockdowns, masks, and vaxx protocols across the board, you know the narrative is crumbling right before your eyes in real time.

All of which begs the question, just what is going on in Pennsylvania? And why?

Meanwhile, down South in VA, look at this: https://www.wnd.com/2022/01/state-democrats-block-ivermectin-treatments-kill-public-comment/

Blocking ivermectin treatments and calling the cops on the dissenters...what I may ask again and again, do they have against this perfectly wonderful treatment that could have stopped this "pandemic" (if there ever was such a thing) in its tracks at the very outset? There is always the "follow the money" gambit, and of course that plays a role here as does everything else when hospitals get untold thousands for every positive covid admittance, even more for every vent, even more for every death, and on and on...but something else is going on that not more than a few paying very close attention know about.

Ivermectin is an anti-PARASITIC. So what, you say.

Carrie Madej has got your so what right here: https://thelethaltext.me/2021/12/28/carries-hydra/

THIS is the information she has been blacklisted, ostracized, and put out of business for. This is what she has been threatened over, in the land of the "free," and home of the "brave." Pardon me while I choke. The only bravery here I see is hers, for reporting what she sees, for being a good person, for holding on to both her soul and the Hippocratic Oath.

If she is even close to correct, I have very little wiggle room in calling this exactly what it looks like, an Invasion scenario. A bioforming. A colonization. A preparation platform. And then everything, and I mean everything, that's been predicted right here over the past 7+ years comes into full, cinemascope view. Because what else are you going to call it? Because it's where CERN, and what Epstein was doing amid the backdrop of the CFR, WEF, NIH, Harvard and the Gates Foundation, and the relentless, unending vaxx push all begin to make linear sense in the largest, most horror-filled perspective anyone could ever imagine in their most fevered nightmares; where all those scarlet threads that have been woven begin to form a picture...

This is me, from my lonely outpost atop Monkey Island, amid every signal and sigil in the book, reporting on the Reconstruction.